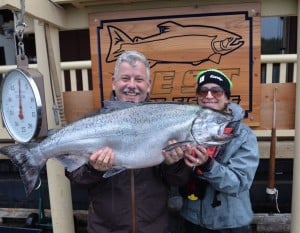 The past trip has been truly memorable. Incredible weather and fishing conditions have been coupled with some remarkable catches. And, it appears we’ve had the most couples at the lodge with this trip exceeding 50% of our guest count.

Coho have been the flair and their size is often exceeding 15 pounds. Chinook continue to be a regular catch and we’ve recently had several Tyee including our largest at 36 pounds.

Hot spots have switched around and we’re now regularly fishing Cape Swain and the western edge of Seaforth Channel. Here, we’re finding large amounts of schooling herring and other baitfish and the salmon are staying close. Cheney 1 and 2 continue to produce and the “Notch” is a regular haunt especially for our repeat anglers from earlier in the season.

Artificial lures are a favourite at this time of year and popular colours are anything green/white. Many anglers are reporting a simple mooching rig drift with cut-plug herring and free weights has been the most productive. Popular

We’re looking forward to our first week of September soon. The weather is expected to continue to be excellent and the fishing is often the very best of the year.

As of 11:00 am today and as the guests are coming in from the last morning of their trip, the report is fishing is excellent and as many as 10 fish per angler.  Four Tyee over 30lbs and multiple nice Coho have been weighed in and more to come. Congratulations Dave and Pat on a nice 30 pounder and to Fred and Laura on their beautiful Chinook. 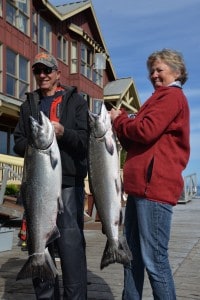 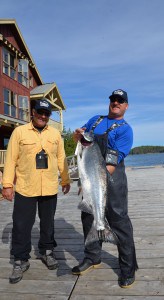 Congratulations to mother and son fishing team Jayne and Ian Coe on their amazing 42 pound “Tyee”. 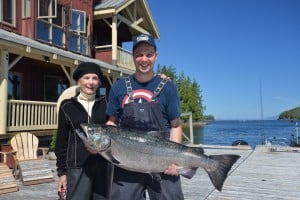 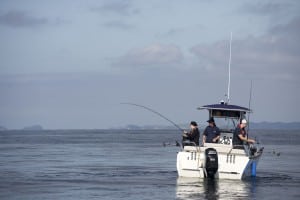 This week has been particularly meaningful as most of our guests are returning from our first season of operation and have been long time friends. Jayne and Ian’s family have a long history in the sport fishing industry in BC and the pursuit of adventure. We’ve voted Jayne as the most stylish angler 2015.

The fishing has been great and the weather has been co-operating as well!

Hot spots continue to be Cheney Point and Cape Mark. The “Notch” on the west side of Wurtele Island has also been producing. Chinook continue to be caught in reasonable numbers with the largest this week being a 42 pounder. Coho are growing and our largest of the season was weighed in yesterday at 18 pounds.

Congratulations to Terry Hughes and her 38 pound Chinook; the largest of our current trip! After an incredible 30 minute fight this awesome fish was landed with the assistance of husband Sean and fishing guide Jay. 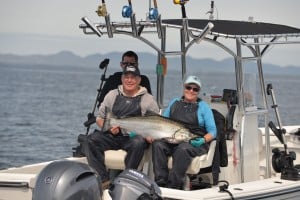 Anglers have been using our “Tyee” rowboat and taking advantage of the calm waters and close proximity to excellent fishing areas. Here, KPL owner Lisa Cuthbert rows while Lisa “T” baits the hooks in pursuit of salmon along the kelp beds at Cheney Point. Five fish to the boat within two hours isn’t bad! 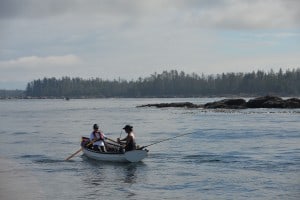 We’re looking forward to hosting the many anglers fishing with us until September 5th. Should you have any questions or require information regarding our fishing and lodge please contact us anytime!

The fishing and weather has been simply fantastic at King Pacific Lodge.

Cape Mark, within the southwest part of our immediate Milbanke Sound fishing area has been producing big fish! Within the past week several Chinook well into the 40’s and 50’s have been taken including a 53 pounder taken by Danny Cortazzo self-guided and Murray Blackham’s 56 pounder guided by Dave Drever. 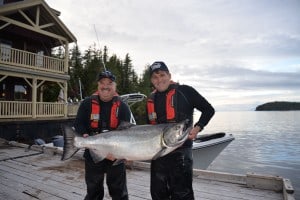 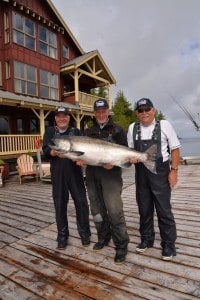 Popular baits continue to be cut plug and whole herring. Some anglers are still fishing anchovies and having good luck. Squid, spoons and hootchies are all working very well.

Coho have been continue to grow in size with the largest now being 16 pounds. They are a little more spread out and being caught on the tide changes only.

We’ve had many more couples than normal fishing with us. Matt and Amanda Austin had a great time recently and weighing in four Tyee and the largest weighing 46lbs. Norm and Carole Anne also had a great sunny afternoon catching 33lbs and 38 pounders. Congratulations! Where else can you catch a fish of this size, enjoy a gourmet meal, have a massage and finish the evening with a view from your very own soaker tub. 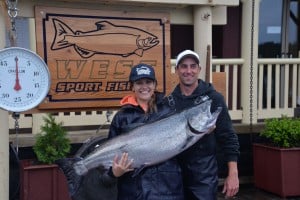 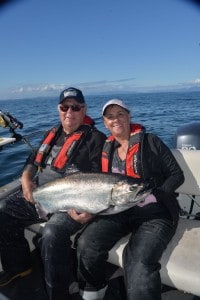 Many anglers have been commenting about the camaraderie on the water between West Sport Fishing boats. Our guides are sharing information and conscious of the success of all anglers. Whether you’re fully guided, instructed or self guided look forward to an awesome trip!

Should you have questions regarding our exciting packages please contact us anytime! 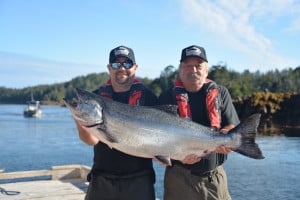 “We’ll be back and bringing more of our friends” were the words of King Pacific Lodge guest Mark Anderson. “We’ve fished the BC coast at many different lodges over the years and this experience has exceeded all expectations.”

This week provided excellent fishing and of course many, many fish stories. Anglers have been accessing all of the productive Milbanke Sound fishing areas with ease; many only minutes from the lodge.

Up until this afternoon, the largest Chinook of the season was boated on the very day last trip. Weighing in at 48.5 pounds. This “Tyee” was enticed by the favoured “Cut Plug” herring trolled at 50ft near Cheney Point.  Anglers have been using their choice of Herring, Anchovy or artificial lures including spoons and “hoochies”.  Congratulations go out to angler Mark R, Mark A and Guide Bradan James. 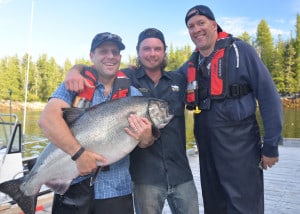 Reports of exceptionally large Chinook are coming in on a regular basis and Tyee topping sixty pounds are what dreams are made of for many anglers. Until this morning, the two other fish guessed at being well over fifty pounds have both spat the hooks and evaded the landing net.  This was until this morning when Dan Sly of Alberta landed a whopping 63 pound Tyee Chinook at Cape Mark. Guided by Troy Hogg and with long time friend Jim Funk, the massive salmon took about 45 minutes to land.  “We dropped our lines at Cape Mark at 6am today and had the fish on the line just five minutes later” Said Dan. “Other boats hooked up right away and several large fish were taken on the same tide.” 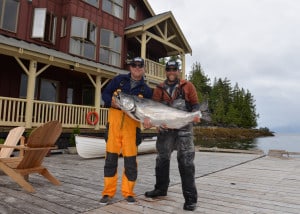 Coho continue to be in good abundance and as our season continues; so does their average size now reaching well over 10 pounds. The largest to date is 15 pounds.

Wildlife, adventure and luxury are all in a days fishing at King Pacific Lodge. Should you be wishing more information on our exciting packages please contact us anytime!